Islam: the plain truth
– told as never before. 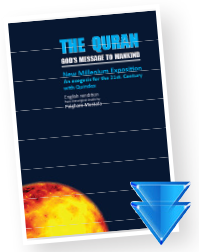 WHAT IS THE DIFFERENCE?

WHY do bad things
happen to good people.

EVIL TRIUMPHS WHEN GOOD PEOPLE DO NOTHING

Why do bad things happen to good people? The manifestation of evil is nothing, except the consequences of those who watch without doing anything to stop it from happening. In these circumstances, wickedness percolates through society and affects even those who have done nothing wrong, except that they have done nothing at all. People can elect good administrators or bad administrators and as a result, we live in harmony or suffer in turmoil.

Beware that suffering reaches not only those who are wicked. It reverberates throughout your community. You should know that God’s retribution is severe. SEE MAIN ARTICLE

Hands that work are better than lips that pray.

Consider the treatment of humanity: for millennia the world’s religious, atheist and secular leaders and governments have applied their collective genius to the riddle of statehood. The results have been corruption, secret sex societies, cultic obsession by the elite with child sex, secrecy, aggression, state sponsored homicide and genocide, war, famine, infanticide, slavery, control, exploitation,manipulation and abuse of the masses in a variety of ways so scary that it defies description. [SEE VERSE 8:25]

Why is there no charity in the Quran?

It may seem striking at first, but we should not be surprised to learn that there is no charity decreed in the Quran. As always there is a very good reason for omitting something that on face value seems good but in actual fact is detrimental. Charity is the occasional voluntary donation of residual income or goods to the needy. It can be an act of pity to temporarily relieve the hardship of someone and makes the giver feel as if they have done something worthwhile. The Quran’s decree is a more permanent solution with far-reaching effects. It propagates a social welfare system to help those in genuine need. The Quran decrees dignity, not charity. See main article.